How to find harmonics in electrical systems

Home / Industry Applications / How to find harmonics in electrical systems 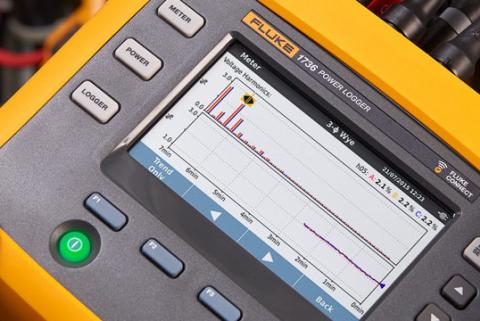 Harmonics are currents or voltages with frequencies that are integer multiples of the fundamental power frequency. If the fundamental frequency is 60 Hz, then the 2nd harmonic is 120 Hz, the third is 180 Hz, etc. Harmonics are created by non-linear loads that draw current in abrupt pulses rather than in smooth sinusoidal manner. These pulses cause distorted current wave shapes, which in turn cause harmonic currents to flow back into other parts of the power system.

While any electronic load can generate harmonics, inefficiency is prevalent wherever there are large numbers of personal computers and other types of equipment that draw current in short pulses. Variable frequency drives (VFD) on the other hand are more efficient, as they are designed to draw current only during a controlled portion of the incoming voltage waveform.

While VFDs dramatically improve efficiency, they can cause harmonics harmonics in the load current, which can lead to overheated transformers as well as tripped circuit breakers. Power-quality analyzers and power loggers can help you identify harmonics in these systems

These unwanted frequencies cause other problems as well, including heat and efficiency losses in motors. The most severe symptoms created by harmonics are typically the result of the harmonics distorting the fundamental 60 Hz sine wave found in facilities. This sine wave distortion results in improper operation of electronic equipment, spurious alarms, data losses and what are often reported as “mysterious” problems.

Knowing the effects created by each harmonic current and comparing them to identified symptoms will aid in troubleshooting. The source of the harmonic must then be isolated and corrected. Summary Voltage problems and the creation of harmonic currents are the two broad areas under which power quality problems occur. Dips and swells, voltage transients, power interruptions, and voltage unbalance all can be monitored, analyzed and compared to equipment operation histories to determine the cause and severity of the power quality problem. The same can be done with the various harmonic currents in a system.